Increase in Production & Income Through Training in Electronic Ratts

Coir industry in India is an important cottage industry contributing significantly to the economy to the major coconut growing states and Union Territories. Coir industry has to its credit a tradition and heritage of centuries. It is one of the few traditional industries converting the coconut husk, waste, into wealth. The coir sector plays a vital role in generating employment opportunities especially to the women in the State of Kerala and Tamil Nadu. Over six lakh individuals are employed in this sector, a majority are from rural area and economically weaker sections of the society. In this, women contribute nearly 85% of the workforce[1]. The need to work close to home because of parenting or household responsibilities is an imperative for these women. The need therefore is an income generating occupation that can be done from home.

Currently, in various Coir industrial societies, yarn is being produced by using manual ratts, which requires the participation of three people, per machine at a time. Subsequently, the income obtained from the output, per ratt, has to be split among the three workers. Owing to the labor-intensive process of current production of yarn, electronic ratts are an easier and more productive alternative for manual ratts. With the use of electronic ratts, approximately 50% more output of yarn is produced. As the machine can be operated using single phase power supply and by just one worker at a time, the use of electronic ratts allows women to work from home. 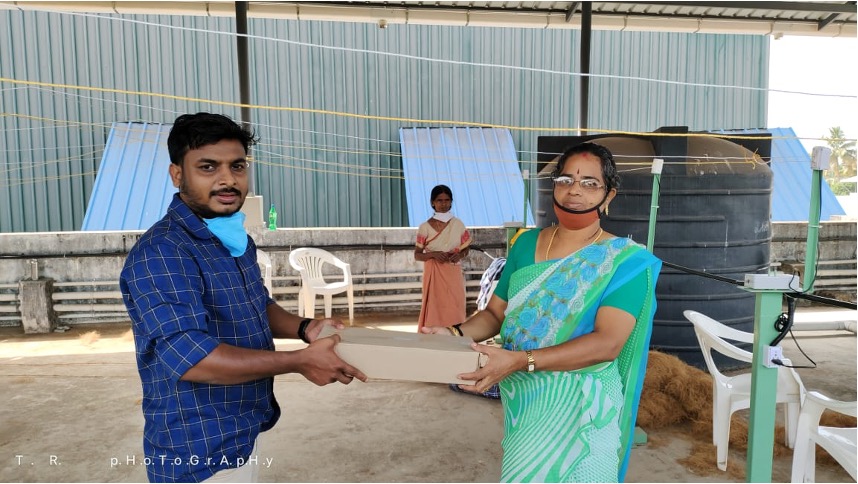 From the 20th to 26th of January 2022, a training was conducted to demonstrate the use of electronic ratts. Five women selected from different Coir Industrial societies in Kanyakumari, participated in the training which was led by the Kerala State Coir Machinery Manufacturing Company Limited (KSCMMC), in Alleppey, Kerala. The training, conducted by a team from KSCMMC was facilitated and funded by the MSME- Trade and Investment Promotion Bureau (M-TIPB), Tamil Nadu. KSCMMC and M-TIPB, with prevailing help from the mByom team successfully conducted the 5-day training in using electronic ratts.

The participants were trained to use electronic ratts with poor quality fibre, for the sole purpose of training. As training is completed, workers can now, with ease, use good quality fibre to produce yarn. By the end of the training, approximately 17 kilograms of yarn per ratt were produced by using electronic ratts. At the end of the training period, the participants were provided with an electronic ratt each, which are now being set up in their respective villages. The trainees who visited Alleppey, are now enabled with the skills to train more workers to use the machine. This training period that took place, can be defined as a jump-start which will help more workers employed in the coir industry, to be trained in electronic ratts, in order to increase production and income.

The younger trainees were also trained to use the manual geotextile handloom, which facilitate weaving of coir geotextiles. A woven geotextile, unlike yarn which is be sold to an intermediary agent, is a finished product and can be sold to departments such as PWD and Irrigation departments. Using aHOPE, an aggregation mobile application solution, the geotextiles produced from homes and villages can be aggregated and payments made electronically to thousands of women’s accounts. mByom is developing aHOPE with an integrated ERP for value chain financing. TReDS, a bill discounting solution is planned to be integrated to ensure quick and smooth release of money to the thousands of women who could be employed at home in their villages productively.

We use cookies on our website to give you the most relevant experience by remembering your preferences and repeat visits. By clicking “Accept All”, you consent to the use of ALL the cookies. However, you may visit "Cookie Settings" to provide a controlled consent.
Cookie SettingsAccept All
Manage consent

This website uses cookies to improve your experience while you navigate through the website. Out of these, the cookies that are categorized as necessary are stored on your browser as they are essential for the working of basic functionalities of the website. We also use third-party cookies that help us analyze and understand how you use this website. These cookies will be stored in your browser only with your consent. You also have the option to opt-out of these cookies. But opting out of some of these cookies may affect your browsing experience.
Necessary Always Enabled

Performance cookies are used to understand and analyze the key performance indexes of the website which helps in delivering a better user experience for the visitors.

Analytical cookies are used to understand how visitors interact with the website. These cookies help provide information on metrics the number of visitors, bounce rate, traffic source, etc.

Advertisement cookies are used to provide visitors with relevant ads and marketing campaigns. These cookies track visitors across websites and collect information to provide customized ads.

Other uncategorized cookies are those that are being analyzed and have not been classified into a category as yet.